The national exam (UN) for the junior high school/ SMP and High School/Vocational High School (SMA/SMK) of the 2016/2017 academic year will begin in batches from 3 April until the 17th of May. The Minister of Education and Culture, Muhadjir Effendy appealed to all parties to prioritize honesty in the organizing of the national examination. Muhadjir hoped that the clean and reliable implementation of UN could instill good character to the students. Teachers could give a good example to the students including not to provide any leaks to answers  to the students in the holding of the exam.

Head of the Center for Educational Assessment of Kemdikbud, Nizam said that both the computer-based (UNBK) and paper-based (UNPK) examinations in general are ready to be implemented. Participants of the UNBK totaled 3,670,429 students, nearly 50 percent of the total number of UN participants (SMP and SMA/SMK equivalent) for this year which totaled 7,344,658 students. The rest use UNPK. In the Special Provinces of Yogyakarta and Jakarta 100 percent of UNBK has been reached this year.

Director of SMK Guidance of Kemdikbud, Mustaghfirin Amin said that the UN SMK participants this year reached 1,327,246 students. Implementation of the UNBK test in SMKs is the highest compared to junior high and high school. Nearly most of the SMK students took the UNBK totaling 1,176,391 students or around 88.6%. 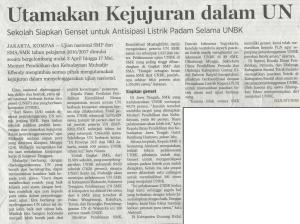