The Ministry of Education and Culture (Kemendikbud) received 46 reports from communities on the first day of the National Exam (UN) for SMA. The majority of the reports were related to the implementation of the Computer Based National Exam (UNBK) and the allegations of leaked questions.

In the press conference regarding UN in Kemendikbud Office, the General Inspectorate of Kemendikbud, Daryanto, said that 17 of the 46 reports were complaints. Of these 17 complaints, 8 were about leaked UNBK questions, four complaints from Sumatra and the other four from Java.

On this occasion, the Secretary of the National Standards Agency of Education (BSNP), Kiki Yuliati, found that the implementation of UN 2017, especially UNKP, faced more serious issues because several regions reported problems in regard to administration of the UN implementation.  This was due to the transfer of authority for higher educations (SMA and SMK) from the regency and city levels to the provincial level.

On a different occasion, The Head of Education Assessment Center (Puspendik) of Balitbang Kemendikbud, Nizam, expected that implementation of the UNBK for SMA to run smoothly. This was due to the questions for SMA being simpler and with no video animation. Therefore, all types of computers with different specifications could access the questions. In addition, Nizam was pleased that there were fewer reports of cheating than last year. 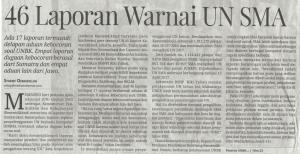