Ministry of Research, Technology and Higher Education (Kemenristek and Dikti) ensures the State Higher Education Entrance Joint Selection (SBMPTN) which begins today will run safely. They have coordinated with the committee to anticipate the wannacrypt or wannacry ransomware attacks against computers that participants use to take the exam.

Minister for Research, Technology and Higher Education, Muhammad Nasir said that it is the responsibility of the Director General to secure it.  His party has coordinated since yesterday with the SBMPTN organizing committee; and is prepared to anticipate the entry of ransom-ware malware during the test. He mentioned that the anticipatory steps taken if the virus attacks the SBMPTN server is to prepare the paper-based system.

For participants who use a computer system during the test, if the computer is infected with the virus, it will be directly switched to the paper-based system so as not to interfere with the implementation of the test. He added that currently the account for computer-based tests is still offline so the virus/malware cannot enter. The computer will start operating during SBMPTN implementation tomorrow. Based on experience each year, Nasir also claimed to have anticipated all possibilities that could occur including middlemen in SBMPTN selection.

Nasir asserted that his party continues to anticipate from year to year. Once an offense occurs, it will be dealt with prosecution. Moreover this is a state secret. In fact, the brokers who have been caught are always criminalized. This year 797,023 participants take the SBMPTN. They are vying for the 128,085 seats available from 85 state universities (PTN) in Indonesia. There are two types of tests in the exam namely the written test (paper-based test) and computer-based exams. The results of the SBMPTN exam will be announced on June 13, 2017. 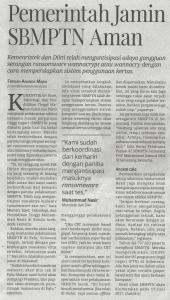