The higher education minister has said he was optimistic Indonesian universities can be more competitive on the global stage, taking into account the improving ranks of its top campuses in a recently released world ‘s best list.

Speaking to students and guest during a public lecture at Borneo Tarakan University (UBT) in North Kalimantan, Research, Technology and Higher Education Minister Mohammad Nasir praised the three universities for their achievement. He said there has been a significant leap made by our campuses in the recent QS ranking. This result shows that the quality of Indonesian universities is improving from year to year.

In Asia, the University of Indonesia ranks 67th, while the Institute of Technology and Gadjah Mada University landed in 86th and 105th position, respectively. The QS University Rankings survey uses six indicators in its scoring system, with academic reputation making up 40 percent of the entire score.

According to the University of Indonesia, the QS results showed that Indonesian higher education had been recognized globally and the university was proud to be included among the world’s 300 best campuses. University of Indonesia rector Muhammaf Anis said they will always try to improve our teaching quality. This result demonstrates our expertise in the social sciences, humanities, health studies and science. 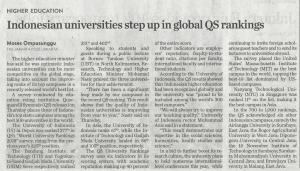