Acting (Plt) Chairperson of the Indonesia Teachers Association (PGRI), Unifah Rasidi said that the central government should consider the local policy related to the five-day school program (LHS). Because a number of regional administrations (Pemda) have their own educational programs and systems tailored to the needs of the community.

According to her, in some schools in the regions there are still many that set the schooling until noon at 12.00. After that students are encouraged to follow religious lessons until the afternoon.

While in many other schools that apply schooling until Saturday; on that day students would get additional lessons such as English or other extracurricular subjects. 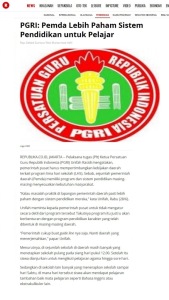